The Messmer Gallery presents with the Portuguese Marisa Ferreira 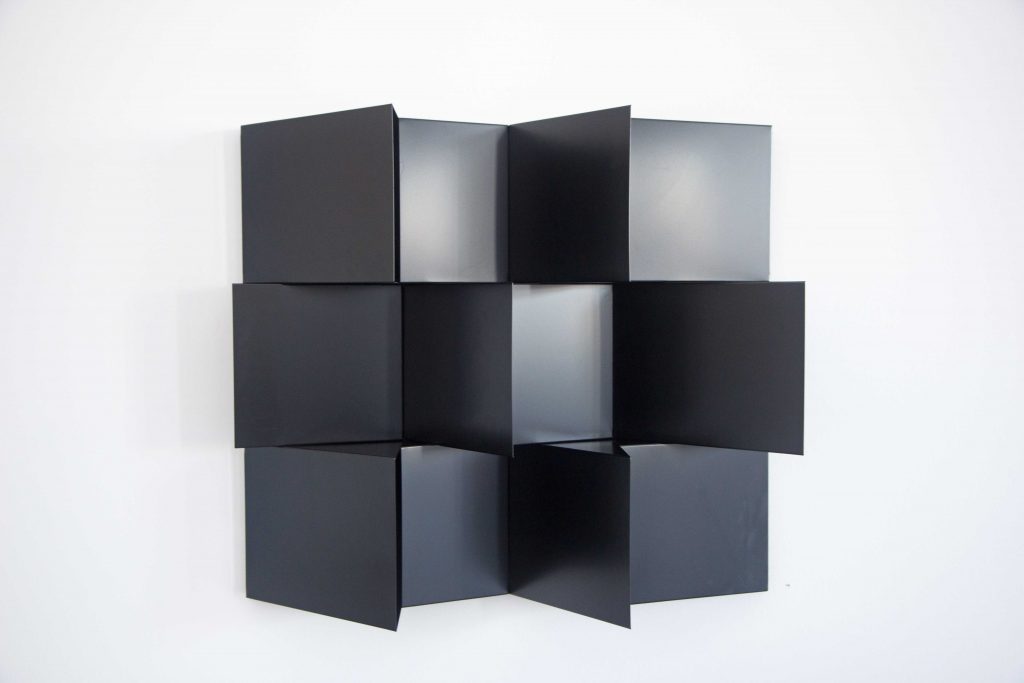 A young, up-and-coming artist whose work is attracting more and more international attention. Her sometimes large-format wall installations adorn public buildings and many of her works are already in public collections. Marisa Ferreira’s art is characterized by an experimental approach to colour, form and space. She combines these three components in exciting three-dimensional compositions that almost challenge the viewer’s movement. Only when walking around the work can the individual patterns and color structures with all their different facets be experienced with the senses. A space-time continuum is created, which incorporates the respective point of view of the viewer directly into the picture and thus goes beyond the passive visual encounter with the work of art.

Marisa Ferreira finds inspiration in scientific theories of human perception and phenomenology, which she translates into mathematical sequences in her works, which are mainly made of aluminum and plywood. Her latest art project “Space, Rhythm and Movement” builds on her earlier “zigzag” structures, which were influenced by Leonardo Fibonacci’s sequences of natural numbers. But she is now expanding this more mathematical concept with the teachings of French philosopher Maurice Merleau-Ponty and German physicist Werner Heisenberg.

In “Space, Rhythm and Movement” this is expressed through the inclusion of a space-time relationship as formulated by Heisenberg in his model of quantum mechanics. By integrating the viewer as an active part of her work, Ferreira conveys social contexts in her art on the basis of Merleau-Ponty’s theses. Depending on the position from which the work is viewed, the image also changes from the image. In this way it can be experienced that the individual subject always has a very personal relationship to his or her environment and to his or her social environment.

SHORT BIOGRAPHY
Marisa Ferreira was born in 1983 in the northern Portuguese city of Guimarães. She has already received numerous grants and prizes for her artistic achievements. She completed her studies from 2002 to 2007 at the University of Èvora and until 2008 at the Faculty of Belas-Artes in Porto. Since 2008 she lives and works in Oslo. The numerous exhibitions at home and abroad testify to the recognition of her artistic achievements and many of her works are represented in public and private collections worldwide: among others in the Sandnes and Bærum Municipality in Bergen, in the Norwegian Tax Office in Oslo, in the collection of the energy company ConocoPhillips, in the Stavanger Art Museum and the Wintershall Art Collection. In addition, Ferreira participated in public art projects. She designed the façade of Oslo Central Station, the stairwell for the Ulsmåg School in Bergen and the main entrance to the Ekofisk 2/4L drilling platforms.